Why I donate to Jammin At Hippie Jack’s

Don’t believe everything you see and hear at first glance.

I have been involved with a variety of charities and socially conscious organizations over the years, Just to mention two: one of the largest foster care agencies in Southern California and a cancer support agency when I was a member of the founding organization that ultimately won a national award for San Diego County.

Through helping these various organizations and watching others from the sidelines, I have learned to be very watchful of how the “inside” of these organizations actually behave towards their employees, their donors, and the claimed individuals they serve. As you can guess, not all charities walk the talk so to speak.

It is good to see repeatedly that they care enough to do the needed work.

That’s why I was pleasantly surprised when I did my due diligence on both the Jammin At Hippie Jack’s festivals, concerts, and fund-raisers AND the 501(c)3 charity “Council of Americana Roots Music”  (C.O.A.R.M.) that actually runs the events and distribution activities. Behind the scenes they’re the same as they publicly claim.

Why I donate money, clothing, new children’s toys, and other items to Jammin At Hippie Jack’s.

Jack Stoddart a.k.a. “Hippie”, his wife Lynn, his family, and the entire organizational team truly does “walk the talk”. I’ve watched it happen over and over again. All, as in ALL donations are distributed with loving care and with no judgement as to who is “deserving or undeserving”. They really do treat everyone alike and have such generous hearts that they don’t hesitate to go out of their way to help others, even on early, early Sunday mornings or in heavy rain and/or snow. It is re-assuring to know that there are still good people who care enough about other folks that they just do the right thing for no personal gain.

Another one of those “be careful what you ask for” things.

Initially I went to a Fall “Jammin At Hippie Jack’s” festival on a whim at the invite from a friend. Always in search of a good camping party, I was told this was not one to miss. My friend was right. On a Saturday or Sunday morning (can’t remember which and it doesn’t matter) a man in a well-worn hat rode up on a golf cart to our camp site and started talking to my friends whom he knew. I had been up most of the night partying with them and other bands all over the large, beautiful farm turned into a festive camp ground.

His worn and tattered hat was evenly matched by his long, tattered beard. At some point, he looked at me, noticed that I didn’t look like I belonged – my truck has California license plates – and asked what I did for a living. I explained that I did Search Engine Optimization (SEO) and Social Media Marketing (SMM) for high paying corporations and clients. He said they needed something like that and wanted to know how much I would charge him.

Being in the spirit of the festival (and probably being hungover too) I must have said something about I would be glad to help him for a quart or so of really good Tennessee moonshine or the like.

I laughed, he laughed, we all laughed. He said his goodbyes to my friends and left. About an hour later or so, he returned with a quart – or maybe it was a gallon – of clear moonshine that somebody must have just given to him and said, “Here, try this”.

Not sure if those were the exact words, but you get the idea.

It was very good; we all had some and commented on how good it was. Even though I can still remember the smell of the bacon cooking, I can’t exactly remember the conversation but it went something like, “Okay, when can you start?”

I must have explained that I would have to sit down with him and his team and get a better understanding of what they did, who their intended audience was, what Web presence they had, SEO/SMM things like that. So to be courteous, I stayed after the festival for a couple of days which was probably good ‘cause I needed to recover, and learned more about their vision, mission, and what they actually did. And more importantly for my own peace of mind, who they really were.

They are who they say they are. 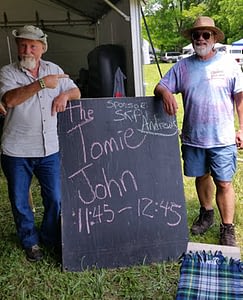 I was impressed. After doing more due diligence – remember I am typically skeptical of what claims charities make – I called Jack, a.k.a. “Hippie” and said that I would help them for free till the next Spring festival and then we would talk more.

Well, to make a longer story short, I have helped them for years now, sponsored worthy bands for their festivals and shows, donated money to build the Music Sanctuary, gone on distribution trips “up the mountain”, and spent a lot of time with them and their team. I was even honored when he asked if I would join the C.O.A.R.M. Board. Then, I really did my due diligence. They are who they say they are.

So why should all this matter to you?

Frankly, it may not. But, if you are like me, and you really want to know that your donations, money, and effort really are going to others that need the help, then I sincerely suggest that Jammin At Hippie Jack’s festivals, concerts, and the C.O.A.R.M. charity is worthy of your own due diligence and donations.

I like these folks. I’ve seen them give their own money to pay for utility bills so the elderly could stay warm – they actually went and paid personally on the dates went “cut-off” was scheduled because of a frantic last minute call – just to help and protect these people they care about.

We vote with our dollars and we make our society.

We not only vote with our dollars; we create the society we want with our personal volunteer time and efforts. In other words, society gets better because we collectively get better. Jammin At Hippie Jack’s is worthy of both your money and your time. See you at the Spring 2018 Festival.  Learn more here.

Sincerely thanks for reading!